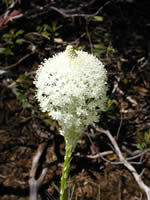 The Plumas National Forest, Feather River Ranger District botanists, archaeologists, fire personnel, and the California Indian Basketweavers Association, have worked together to accomplish two prescribed fires, totaling five acres to promote the regeneration of bear grass (Xeropyllum tenax) for basketry. Local Indian basket weavers currently lack the high quality bear grass leaves needed to maintain their cultural traditions. Bear grass must be burned in order to produce flexible, strong leaves from the new growth that occurs 1-3 years after burning. Bear grass has been used for hundreds if not thousands of years by California Indian basketweavers, and the plant is an essential element in traditional Maidu basketry, art, and culture. Bear grass that has not been burned is not usable for basket weaving.

There is little known about the reintroduction of fire into the Northern Sierra Nevada Mountains for bear grass regeneration and our prescribed fires have been a learning process for all involved. The first burn resulted in high overstory and bear grass mortality. It is suspected that low fuel moisture and aggressive lighting techniques eliminated the duff and litter layer. The sensitive growing region of the bear grass is located at the soil/ duff interface and the elimination of the duff layer can have deleterious effects on the bear grass. Regardless of the high bear grass mortality, the local Maidu basket weavers were pleased that fire was put back into one of their historic gathering sites and new basket material was present the subsequent year.

The second prescribed fire was conducted in the spring of 2007 and appears to be a tremendous success. The bear grass was burned and dead fuels reduced while the duff layer was maintained, helping ensure that the sensitive meristematic tissue was not cooked. The first burn completely removed the duff and litter layer and resulted in high plant mortality, while the second prescribed fire resulted in a patchy burn that did not completely burn the entire area, creating a mosaic of burned and unburned areas. Pretreatment monitoring plots were installed to examine fuel loading, plant cover, and density. The analysis of post treatment data will help determine the success of the spring treatment. 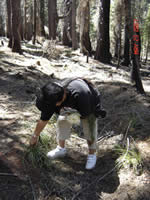 Vivian Parker of the California Indian Basketweavers Association commented, "These projects are historical landmarks in the history of the federal relationship with the indigenous people of California, and I am so glad I could be a part of it."

Implementation Plan and Accomplishments to Date

This project began in the fall of 2005 and was funded with a grant through the Plumas County Resource Advisory Committee. Results of the first burn were evaluated in the field by local basketweavers, fire staff, and district botanists. The second burn was conducted in the spring of 2007. Pretreatment monitoring plots were installed and data recorded. Fire management personnel utilized this burn as a training opportunity, helping to further decrease the overall cost.  An additional 150 acres have analyzed for the use of prescribed fire. For the next five years, 1-5 acre plots will be burned on a rotation to help insure an adequate supply of material for local basket weavers. This project is a prime example of successful adaptive management and internal and external collaboration.