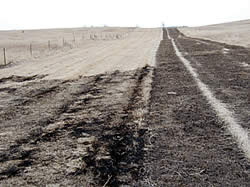 Area shows how fire (on left) was stopped at the existing black line burned in October (at right).

On Feb. 24, FWS fire personnel got to see just how effective the new equipment will be in helping to control wildfires.

On that day, a homeowner living near the Maga-Tahohpi WPA (Waterfowl Production Area) was burning paper in a burn barrel when a spark escaped into the grass on his private property. The fire grew and moved onto the federal land, and the homeowner called the local volunteer fire department.

"We had burned a 2-mile-long black line in that area last October," said Region 6 Prescribed Fire Specialist Charles Frohme, who noted that the grass in the area grows two to 3 feet tall.  "The idea is pre-suppression.  You get the line in place in advance and then in spring when you do your prescribed fire, your holding operations are eased up. You don't have to wait for the line to be burned and you don't have to eat smoke all day."

Frohme said the black line that was burned in October clearly stopped the fire in February.  "You can see where the fire burned right up to it," he said. He noted that the on-site fire department was able to contain the two-acre fire within an hour using hand tools, with a fire engine used to mop-up area.

"It's a good tool to have and we're going to keep testing it and tweaking it, and we're definitely going to be using it again," he said.